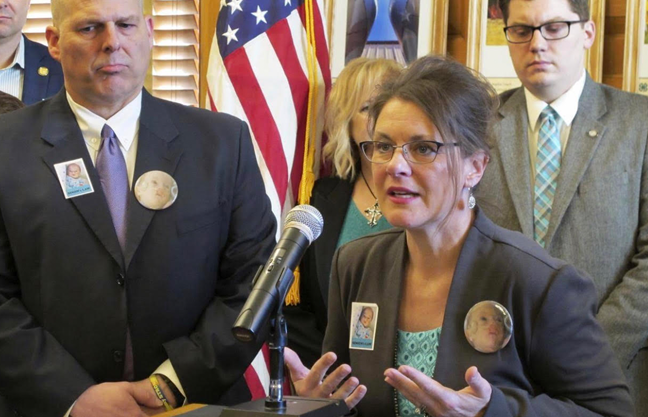 On September 7, 2010, God blessed us with a precious son, Simon. Even with a bilateral cleft lip he was perfect for our family.

On Simon’s third day of life, he was diagnosed with Trisomy 18, also known as Edward’s Syndrome. For your reference, Down Syndrome is Trisomy 21.

Tragedy struck on December 3rd, our son’s oxygen levels were falling. Shockingly, we were told, “This is the end. Nothing can be done.”

After Simon’s death the nurses told us their hands had been tied. We were given indications that we should examine Simon’s chart.

There we found the horrible truth; a DNR order had been placed in Simon’s medical file. Something we had no knowledge of and certainly had not given our consent.

This explained why the staff stood around and did nothing.

We also discovered that Simon had been getting only comfort feeds, which is an insufficient amount of food for growth and development. Simon was being intentionally starved!

We discovered on Simon’s last day of life and once earlier that he had been given Ativan (lorazepam), a drug, which was contraindicated for his apnea. This was used to suppress his respiratory system. Simon’s chart indicated declines in his oxygen levels. A pharmacist friend told us that he would never give this drug to an adult with apnea, much less an infant!

Unknown to us someone decided our son’s life had no value. Without our knowledge or consent someone decided to withhold care, administer medications to hasten death and order a DNR to finalize Simon’s life.

Since losing my son, Simon is has been my passion to help other families in need.

Simon’s Law, named after Simon Crosier, was passed in Kansas in 2017, making them first in the nation! Other states have since enacted Simon’s Law. Simon’s Law originated in Missouri; which took five years to pass. I am honored to say that currently nine states are “Simon States!”

It is gut-wrenching to learn that all of this is legal and common for a physician to withhold care and place a DNR in a minor child’s chart without parental knowledge or consent. Even worse, we discovered, it doesn’t matter if the child is one day old or 17 years old. It doesn’t matter if the child has special needs or in a coma from a traumatic head injury. Any doctor can unilaterally issue a DNR order for a minor.

Unfortunately, Simon is not an isolated incident. The practice of unilateral issuance of DNR orders by physicians is recorded as truly happening in a film documentary called “Labeled.”

However, Simon’s Legacy lives on. We have now established not one, but two nonprofit organizations in our son’s memory. Simon’s Law is our 501c4 and Simon’s Kids is our 501c3.